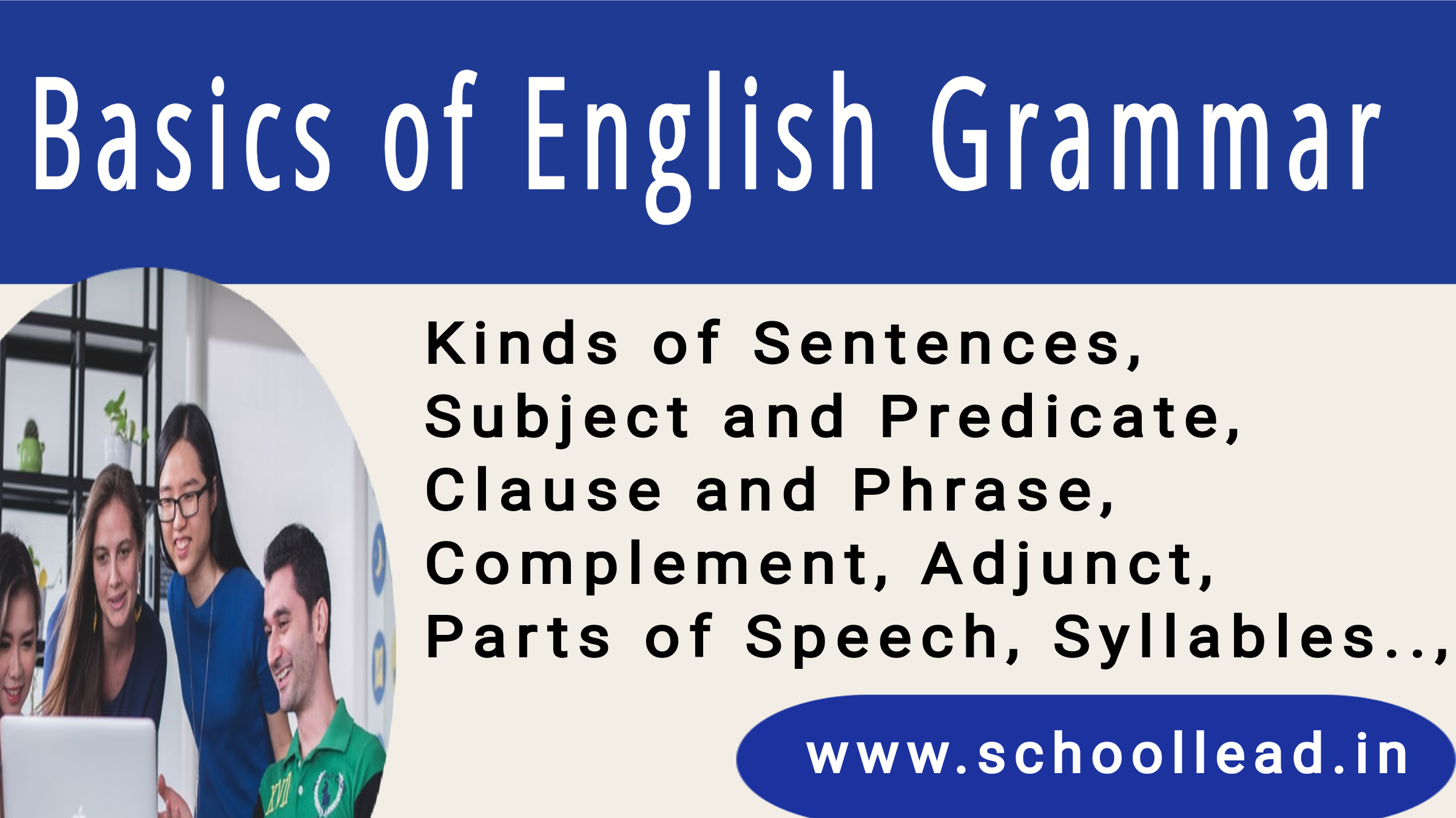 Do you want to be perfect in English grammar? But confused about where to start? When you want to learn English Grammar or spoken English it is always better to begin with the basics.  Because the basics lay a strong foundation.

Without these basic concepts, it is difficult to understand further grammar. So here, you will find all the necessary basics of English Grammar to start with.

Grammar is a system of rules and principles for speaking and writing a language.

The word grammar comes from the Greek, meaning “craft of letters.”

What is a syllable?

A syllable is a single unit of written or spoken word, pronounced in an unbroken sound. It joins consonants and vowels to form words. A word may contain one or more syllables.

One-syllable words are known as monosyllabic:

Two-syllable words are known as disyllabic:

Three-syllable words are known as trisyllabic:

Four or more syllable words are known as polysyllabic:

What is a word?

A word is a letter or group of letters that have meaning when spoken or written.

A compound word is made up of two or more words that are linked together to produce a word with new meaning:

There are three types of compound words: Open, Closed, and Hyphenated.

The Phrase and The Clause

A phrase is a group of words that makes sense, but not complete sense.

beside the lake, beneath the tree, as soon as possible etc.,

A clause is a group of words that forms part of a larger sentence. It has its own subject and predicate.

What is a Sentence?

A sentence is a group of words that are arranged orderly to give proper and complete meaning. Every sentence starts with a capital letter and ends with its respective punctuation mark.

According to their meaning and purpose, the sentences in English have been divided into four kinds.

The below table gives you a quick idea of the sentences.

A sentence that states or declares something is called a declarative or an assertive sentence. It ends with a full stop.

A sentence that asks a question is called an interrogative sentence. It ends with a question mark. It often begins with interrogative words like who, what, where, when, why, how, or auxiliary/helping verbs like do, did, does, may, might, can, shall, will etc.,

A sentence that expresses a command, advice, or a request is called an imperative sentence. It usually ends with a full stop but sometimes ends with an exclamation mark.

Generally in Imperative Sentences, the subject is omitted or understood.

Pay the fee. (You pay the fee)

A sentence that expresses sudden emotions like excitement, surprise, happiness and anger, pain, disgust and wishes is called an exclamatory sentence. It ends with an exclamation mark.

What is a Complement?

Complements can be divided into two main types:

It can be an adjective, noun, or pronoun that follows linking verbs like be, smell, seem, taste, look, become, appear, feel etc.,. It describes the subject.

In the following sentences, the part which gives more information about the subject has been highlighted and that part is called the subject complement.

It can be an adjective, noun, or pronoun that follows a direct object and describes the object.

(In this sentence, knowledge of grammar is the subject, makes is the verb, English is the direct object and easy is the object complement of English.)

What is an Adjunct?

In English Grammar there are five major elements of clause structure and an adjunct is one of them. They are subject (s), verb (v), object (o) and complement(c)  and adjunct(a).

An adjunct is a word, a phrase, or a clause that is not necessary to the structure of the sentence grammatically. It is usually an adverb that modifies a verb.

Even if the adjunct part is removed from the sentence there will be no grammatical effect on it. It only adds extra meaning to the sentence but not necessary information.

What is an Object?

An object is a noun or a pronoun that is affected by the action of the verb.  When the Transitive Verb is used in a sentence, it requires an object to complete its meaning.

How do we identify the object in a sentence?  Well! It is easy. The subject (noun or pronoun) answering What? or Whom? after the verb is called the object.

The answer is the Audi car.  So this is the object.

When there are two objects in a sentence –

Answer to the question What? is called the Direct Object.

Answer to the question Whom? is called the Indirect Object.

She offered me a cup of coffee.

What is offered? a cup of coffee.  This is the Direct Object

The Subject and The Predicate

The subject and the predicate are the two main parts of every complete sentence.

The subject: The name of the person, thing, or idea we speak about is called the Subject.

The predicate:  What we say about the subject is called the Predicate.

The subject is highlighted.

How do we identify the subject in a sentence?  Well! There is a technique. You can use the words Who? or What? before the verb and question it. The answer will be the subject.

The students are playing chess.

Here, ‘are playing’ is the verb.

Who are playing chess?

the answer is ‘the students’ – the subject.

Pints to focus on:

What are Parts of Speech?

According to their positions and usages, all the words in English are divided into eight classes. These are called parts of speech. Parts of speech are a part of the basics of English grammar one needs to focus on avoiding any kind of mistakes and understand grammar properly.

A noun is a word used as the name of a person, place, thing, animal, activity or idea.

The nouns can be further divided into five groups. Let us see them in the following table.

PRONOUN – For a noun

A Pronoun is a word used in place of a noun or noun phrase to avoid repetition.

Amar is a good student.  He goes to school regularly.

Teachers are conducting online classes. So they advise all the students to attend them.

ADJECTIVE – Adds something to the meaning of a noun

An adjective is a word used to describe, or modify a noun or pronoun and usually adds something to their meaning.

Adjectives can be used in two ways attributively and predicatively.

There are 12 types of Adjectives.  Let us see them in the following table.

A verb is a word that shows action, possession, or state of being or existence of someone or something.

As stated in the definition verb can be described in three ways:

ADVERB – Describes a verb, an adjective, or another adverb

An adverb is a part of speech that modifies a verb, an adjective, or another adverb. It tells us how, where, when,  how often, or to what extent something was done. Mostly, the adverbs end in -LY

Examples of Adverbs in sentences:

A preposition is a word placed before a noun or a pronoun to show its relation to some other word in a sentence. They can indicate time, place, or relationship.

Examples of prepositions in sentences:

Types of Prepositions:  The prepositions can be divided into five types.

These Compound Prepositions are made by prefixing a preposition to a noun, an adjective or an adverb.

amongst, amidst, above, around, along, across, about, below, beneath, beside, between, beyond, outside, within, without .., etc.,

Examples:  from behind, according to, up to, from within, from across etc.

Examples: during, including, regarding, barring, concerning, considering, etc.

Examples: according to, by means of, owing to, with a view to, in place of, in front of, in spite of, instead of, in order to, by virtue of, by way of, on behalf of…. etc.

A conjunction is a part of speech that is used to connect words, phrases, clauses in a sentence and shows how they are connected.

Examples: for, and, nor, yet, so, or, and, but, although, because, if, since, though, unless, when, where, however, therefore, whenever, while…. etc.,

There are three main types of conjunctions:

Examples: although, as, because, before, how, if, once, since, than, that, though, until, when, whenever, where, whether, while, why…etc.,

An interjection is a word or phrase that expresses a strong feeling or emotion. It is a short exclamation of joy, sorrow, excitement, wonder, surprise, pain, sadness, happiness, and so on.  It has no grammatical connection with any other parts of the sentence.

Sometimes, the Adjectives and the Nouns can also be used as Interjections.