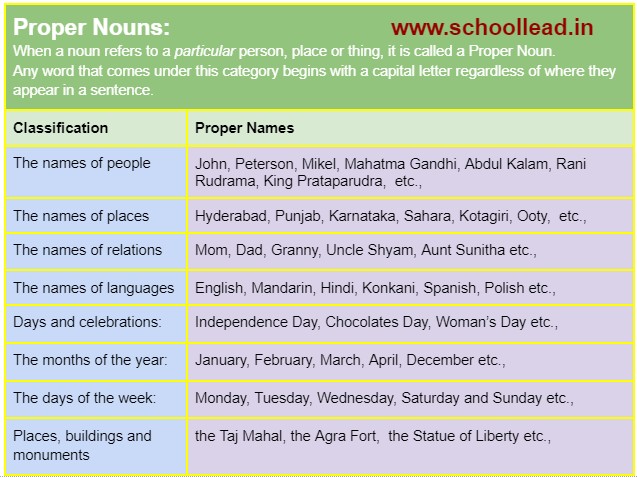 When a noun refers to a particular person, place or thing, it is called a Proper Noun.

The words that come under this category of Proper Nouns begin with a capital letter regardless of where they appear in a sentence.

Definition of a Proper Noun:

A Proper Noun is the name of some particular person, place or thing.

2. Titles such as president, king, or emperor should begin with a capital letter when used with the name. But a small letter is used in other instances.

We can also use as:

In other instances, these words become common nouns.  So we begin with small letters.

4. Use of capital letter with the titles of relations:

Titles of relations begin with a capital letter if it is used in place of the name.

6. Some other examples – where we use proper Noun with a capital letter:

(Capitalisation is optional with the Earth (earth), the Moon (moon) and the Sun (sun)                 depending on the context of whether they are used as common or proper nouns..)

1.We do not use the definite article ‘the’ before the names of people, places, companies, languages and anything with a person name before it etc.,

But if the company already contains ‘the’ in the name, we use it along with the company name capitalising the initial letter.

3. We do not use the definite article ‘the’ before the names of places like countries and            states, roads, streets, squares, parks, etc:

The United Kingdom, The United States of America, The Punjab etc.,

4. We do not use the  article ‘the’ before the titles like President/Doctor/Mr etc + Name:

We generally use the definite article ‘the’ before the names of the following.

Sometimes, Proper Nouns can also be used as Common Nouns. We don’t normally use any article before Proper Noun but when it becomes a Common Noun we definitely use one.