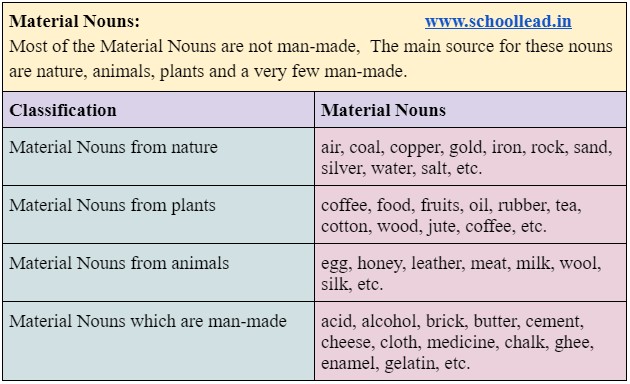 Material Nouns are the names of materials or substances out of which things are made.

Material nouns are uncountable nouns, we cannot count them as they are in the forms of liquid, semi-liquid or solid.

Most of these are not man-made,  The main source for these nouns are nature, animals, plants and a very few man-made.

Rules to be followed with Material Nouns:

We do not generally use articles (a, an, the) before the Material Nouns

We are not supposed to use the numeral adjectives (one, two, three, four, many, few, a few, etc.) before Material Nouns.

But we can say:

Sometimes, Material Nouns can also be used as Common Nouns. There is a common confusion between these two nouns.

For example, a gold ring is a Common Noun but gold is a Material Noun.

The simple trick to understand it clearly is that Material Nouns are uncountable and the Common Nouns are countable.

Pick the Material Nouns from the following sentences.