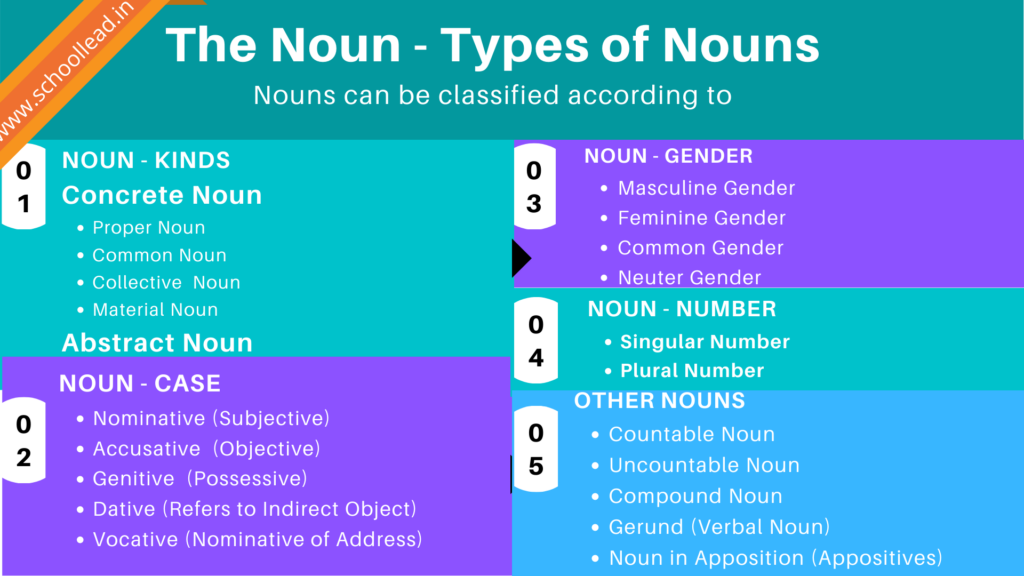 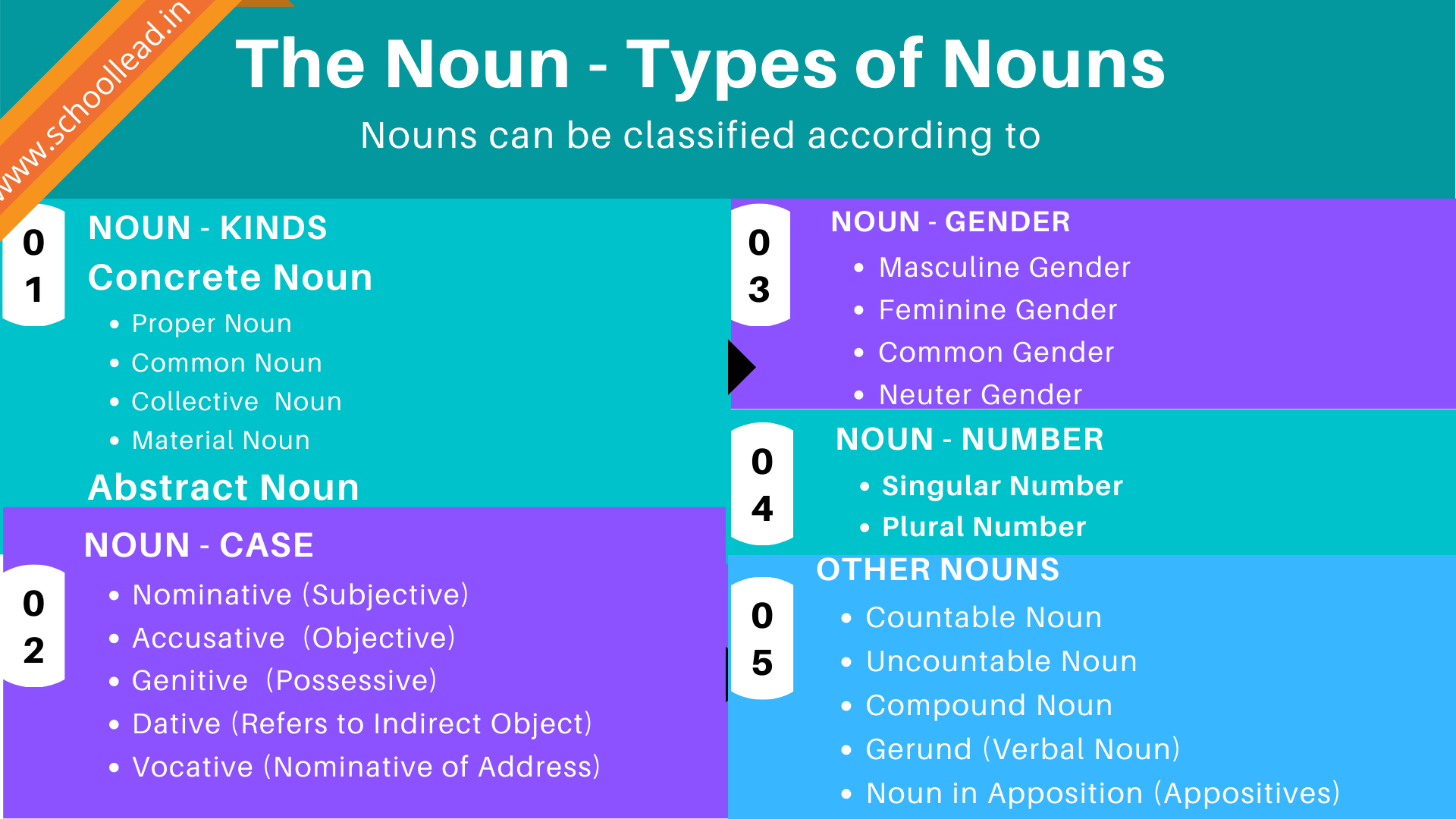 Introduction to Types of Nouns:

The noun is one of the eight parts of speech and it plays a very significant role in English Grammar. The verb is the first most important part of speech and the noun is the second.

In this article, you are going to learn every aspect of a Noun like what a Noun is, the uses of a Noun, the Types of Nouns, Noun Gender, Noun Number, Noun Cases with all possible examples and exercises.

Definition of a Noun:

A Noun is a word used as the name of a person, an animal, a place, a thing, an idea or an event. (To simply put it ….A noun is a naming word)

If you observe the above sentences, the words in bold italics are called nouns which also indicate different types of nouns such as:

Primarily, the Nouns can be divided into two kinds

CONCRETE NOUNS – The Nouns that are physical in nature and we can see and touch them.

ABSTRACT NOUNS – The Nouns that we cannot see and touch. Abstract nouns are ideas, concepts and feelings.

Further, the CONCRETE NOUNS can be subdivided into four types.

When a noun refers to a particular person, place or thing, it is called a Proper Noun. Any word that comes under this category begins with a capital letter regardless of where they appear in a sentence.

When a noun refers commonly to any person, place or thing of the same kind or class, we call it a common noun.

Most of the nouns are common Nouns and they are different from Proper Nouns. They are not written with a capital letter at the beginning unless we start sentences with them.

They are the names of materials or substances out of which things are made. Material nouns are countable nouns, we cannot count them as they are in the forms of liquid, semi-liquid or solid.

When a noun refers to the individuals or things as an undivided single unit, it is called a Collective Noun. It is generally used for a group of people or things. Since the noun is considered a single unit, the verb we use must be singular.

Collective Nouns are the names given to a collection of persons, animals or things, taken together, and spoken of as one whole.

The Uncountable Nouns are the Nouns that cannot be counted.  But these Nouns can be made countable by the use of partitives.

Gold is an Uncountable Noun.  But we can measure or count it by the use of a bar of / a gram of gold.

Here is a list of such partitives for your ready reference.

When a Collective Noun denotes individual members or things of the group, it is called a Noun of Multitude.

Learn more about Nouns of Multitude

When a noun refers to an idea, a concept, a feeling, a quality, a state or a condition, it is called an Abstract Noun. It is intangible and does not have a physical existence.

An Abstract Noun is the one that names something which we cannot see or touch like friendship, love, youth, death, anger etc., Since they have no physical existence, we can not see, hear, touch, taste, or smell them. We can only feel or conceptualize them. In other words, I can say that Concrete Nouns are like the hardware of a computer and Abstract Nouns are like software of a computer.

We can see a person who has got the knowledge, a picture that has beauty, a child full of intelligence but the Abstract Nouns knowledge, beauty and intelligence cannot be seen all alone.

Uncountable nouns refer to the names of things that we cannot count. These nouns are also called non-count or mass nouns. These nouns are seen as a whole or mass and cannot be separated or counted. They have only a singular form. There is no plural form for Uncountable Nouns.

Compound nouns are nouns that are made from two or more words. They are combined to create a new meaning.  Each Compound Noun acts as a single unit and can be modified by adjectives and other nouns.  In this combination, we usually find two parts where one is a noun and the other word can be a noun, an adjective, a verb or a preposition. We also find some other combinations. (List is given below)

There are three types of Compound Nouns:

When we want to show that something belongs to somebody or something, we use the Possessive Nouns. These nouns can be singular or plural. It is easy to identify a possessive noun as every possessive noun contains an apostrophe.

Possessive Nouns are nouns that indicate ownership or possession.

When a car belongs to my friend, we say

When a mobile belongs to Ravan, we say

When the room belongs to the teachers, we say

When the property belongs to the Birlas, we say

If a park is for the children, we say

We generally show the possession by adding an apostrophe (‘) to a plural noun and an apostrophe + the letter s (‘s) to a singular noun.

In sentence 1 above, the paintings belong to a single girl, so an apostrophe and s are used.

In sentence 2 above, the school belongs to several girls, so only an apostrophe is used.

The form of the Verb ending in ‘-ing’ used as a Noun is called Gerund or Verbal Noun.

The form of the Present Participle and Gerund is the same but the usage is different.

Gerund has the force of a Verb and Noun. It is a Verbal Noun.

AN APPOSITIVE:  (A NOUN IN APPOSITION)

The word appositive is derived from the Latin phrases ad and positio meaning “near” and “placement.”

Learn more about an Appositive

When a noun refers to one person or thing, it is said to be in the Singular Noun/Number.

When a noun refers to more than one person or thing, it is said to be in the Plural Noun/Number.

GENDER OF THE NOUN:

The word ‘Gender’ comes from the Latin word ‘genus’ which means ‘kind’ or ‘type’. A Gender is a noun that shows whether the noun is Masculine, Feminine, Common or Neuter.

Thus, there are four types of Genders in English Grammar.

Common Gender: A noun that denotes either a male or a female is said to be of the Common Gender.

Neuter Gender: A noun that denotes a thing that is neither male nor female is said to be of the Neuter Gender.  It expresses the inanimate things that do not have life, like human beings.

Learn more about Gender of the Noun

A grammatical case indicates the function of nouns and pronouns in regards to their relationship with other words in a sentence.

The case of a noun tells us about the position of that noun in a sentence.

There are five cases in English Grammar.

Nominative case:  If a Noun or Pronoun is used as the subject of a verb, it is said to be in the Nominative Case.

Accusative case: If a Noun or Pronoun is used as the object of a verb, it is said to be in the Objective or Accusative Case.

Possessive case: If a Noun denotes possession or ownership, it is said to be in the Possessive or Genitive Case.

Dative case: If a noun is used as an Indirect Object of the verb in a sentence, it is said to be in the Dative Case.

Learn more about The Noun – Case

School Lead – Overseas Education has been started with a vision to provide hassle-free overseas education services to students who want to realize their dreams of studying abroad.