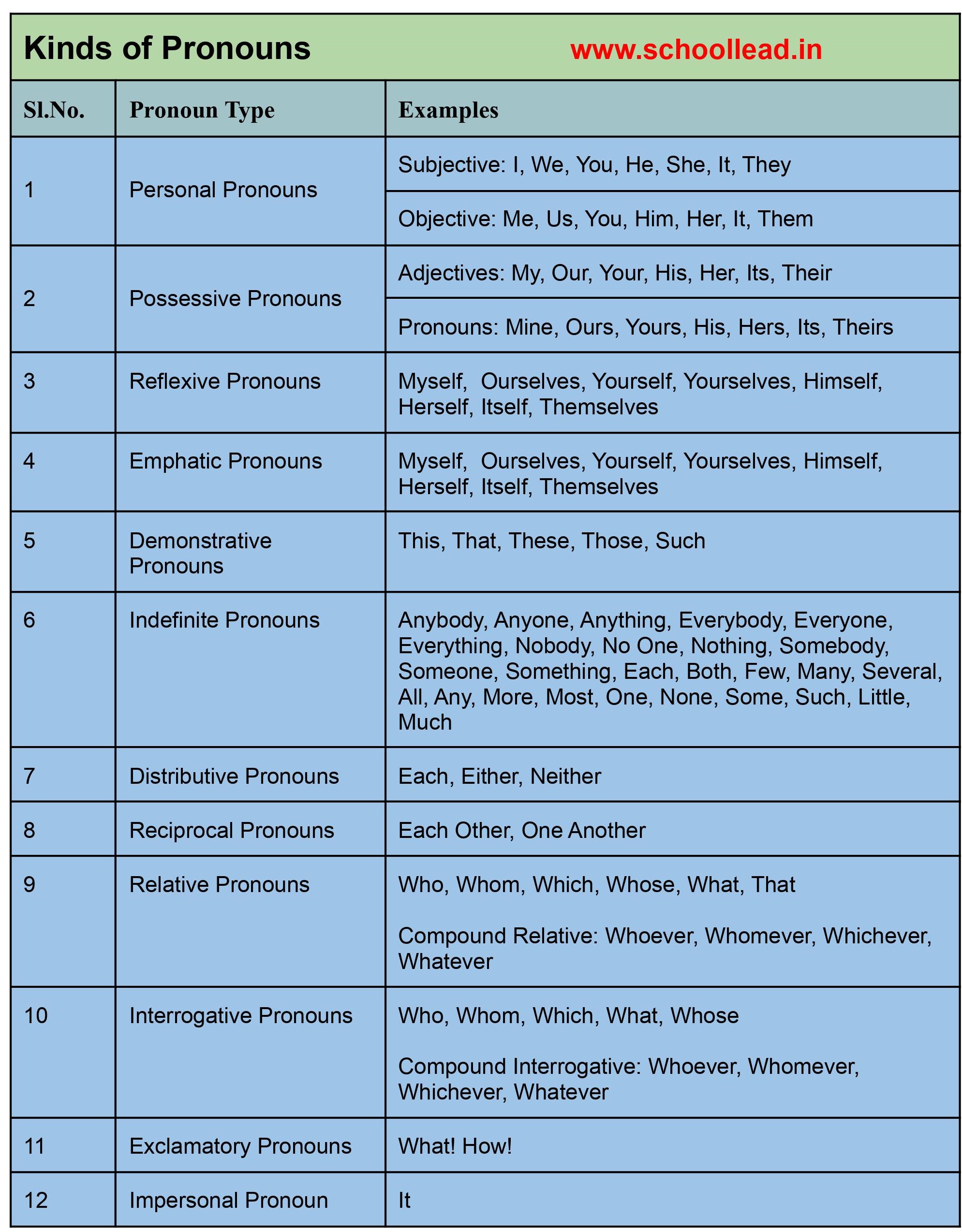 What is a Pronoun:

A Pronoun is a small word that is used in place of a noun to avoid the repetition of nouns.

Every pronoun must have a clear antecedent (the word for which the pronoun stands).

The above sentences look awkward because of the repetition of the word Shravan. They can be written in a better way in the following manner by the use of pronouns.

The Antecedent of a Pronoun:

Pronouns are generally used with reference to their antecedents. The antecedent of a pronoun is the noun or noun phrase being replaced by the pronoun. In the above sentences, the noun ‘Shravan’ is an antecedent.

Definition of a Pronoun

A Pronoun is a word used instead of a Noun or Noun Phrase.  (Pronoun means for- noun.)

A pronoun can act as a subject (I), object (me), or possessive (my or mine)

There are Twelve types of pronouns as listed below.

Personal pronouns are used in place of specific people or things that we are talking about.

We use these Personal Pronouns keeping in view of the Number, Person, Gender and Case:

A Demonstrative Pronoun is used to replace a noun or a pronoun that has already been mentioned in a sentence. This pronoun is used mainly to avoid repetition that may lead to any kind of confusion.

There are only four Demonstrative Pronouns: this, that, these, those

Indefinite pronouns don’t refer to any particular person or thing. They are used to point to persons or things in general. These pronouns can function as singular, plural or both (singular and plural).

Distributive Pronouns refer to persons or things one at a time. It considers members of a group separately, rather than collectively. This pronoun is always singular and is used with a singular noun and verb.

Distributive Pronouns are: Each, either, neither

The Possessive Pronouns replace a noun with an apostrophe and “s” to show ownership or possession of a noun. A Possessive pronoun is mainly used to substitute a noun or a noun phrase in order to prevent the repetition of a noun in the sentence.

Possessive Pronouns are: mine, yours, ours, hers, his, its, theirs

A Reciprocal Pronoun is used when two or more nouns express a mutual or reciprocal action in a sentence.

The Reciprocal Pronouns are ‘each other’ and ‘one another.’

The main purpose of using these pronouns is to stop unnecessary repetition in a sentence and show the collective and reciprocal action that happens between two or more persons or things.

Each Other: When the antecedent of a Reciprocal Pronoun refers to two things in a sentence, we use each other.

One Another: When the antecedent of a Reciprocal Pronoun refers to more than two things in a sentence, we use one another.

Altogether, we normally call them interrogative words which are also known as 6Ws and 1H.

A pronoun that is used as an exclamation (to express sudden emotion) is called an Exclamatory Pronoun.

In the following sentences the word ‘What’ with the exclamation mark has been used as a Pronoun.

When there is no possibility of using a clear subject in a sentence, we generally use ‘there or it.

‘It’ is the only Impersonal Pronoun in English.

More about Impersonal Pronoun ‘It’: