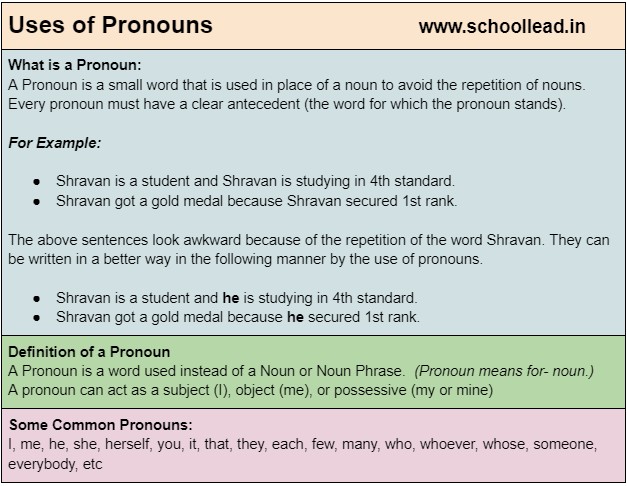 What is a Pronoun:

A Pronoun is a small word that is used in place of a noun to avoid the repetition of nouns. Every pronoun must have a clear antecedent (the word for which the pronoun stands).

The above sentences look awkward because of the repetition of the word Shravan. They can be written in a better way in the following manner by the use of pronouns.

The Antecedent of a Pronoun:

Pronouns are generally used with reference to their antecedents.The antecedent of a pronoun is the noun or noun phrase being replaced by the pronoun. In the above sentences, the noun ‘Shravan’ is an antecedent.

Definition of a Pronoun

A Pronoun is a word used instead of a Noun or Noun Phrase.  (Pronoun means for- noun.)

A pronoun can act as a subject (I), object (me), or possessive (my or mine)

Let us learn the following rules to use the pronouns in an effective way without any mistakes.

The Pronoun should agree with the Noun in Number, Gender and Person.

When the Pronoun is used in Subjective Case, we use: I, we, you, he, she, it, they

The use of Pronoun after ‘than’, or ‘as’ should be a Subjective Case.

But we can say:

In the following sentences, both the subjective case or objective case can be used as per the meaning that we want to convey.

As a Direct Object:

As an Indirect Object:

Uses of Pronouns: PDF Worksheet on Object of Preposition

With the words ‘let’, ‘looks’, ‘but’, ‘except’, we use the objective case, not the subjective case.

The simple technique that we should remember here is – always use ‘I’ in the subject place and ‘Me’ in the object place.

When two or more Singular Nouns are joined by ‘and’, we use a Plural Pronoun.

When two or more Singular Nouns are joined by ‘and’ but refer to the same person or thing, we use a Singular Pronoun.

If the two or more Singular Nouns refer to the different persons or things, we use a Plural Pronoun.

When two or more Singular Nouns are joined by ‘and’ but preceded by ‘each’ and ‘every’, we use a Singular Pronoun.

When two Singular Nouns are joined by ‘or’, either….or’, ‘neither…..nor’, we use a Singular Pronoun.

When a Singular Noun and a Plural Noun are joined by ‘or’, either….or’, ‘neither…..nor’, we use a Plural Pronoun and Plural Noun should be near to the verb.

The order of Personal Pronouns:

Order of preference when we use Pronouns:

When we use Pronouns that refer to different persons in a sentence, we generally follow the following order.

Incorrect: He and myself are not suitable for it.

Correct: He and I are not suitable for it.

Incorrect: I, you and he can convince her.

Correct: You, he and I can convince her.

Incorrect: I and she can accompany you.

Correct:  She and I can accompany you.

Incorrect: He and you must attend the class.

Correct: You and he must attend the class.

Incorrect: I and you are not eligible for that.

Correct: You and I are not eligible for that.

When ‘I’ is joined by ‘and’ to the second or third person, we use a Plural Pronoun of first-person.

When a Pronoun is used for Collective Noun, we use the neuter gender –

‘They’ or ‘their’ for Plural